 Home > Chemial News > Echemi Focus > What are the impacts of high tariffs on chemical products?

What are the impacts of high tariffs on chemical products? 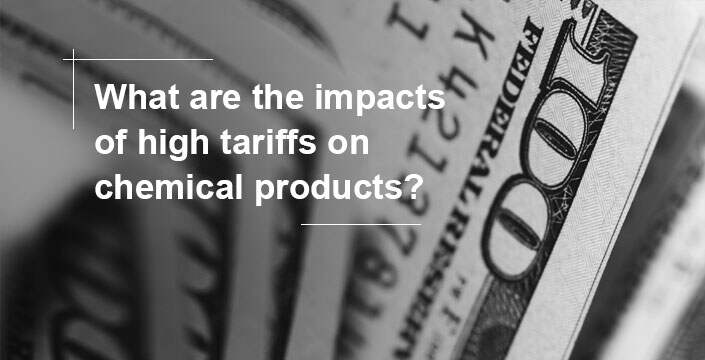 American Chemical Stocks Prices Have Plummeted Due To Tariffs

This should be the third time that the United States and China have engaged in a war over tariffs. On the previous two occasions, China did not take tough measures. With the US raising tariffs from 10 percent to 25 percent, the Chinese government has no choice but to fight back.

The US chemical stocks prices plummeted after Mr. Trump tweeted that he would impose a 25 percent tariff on $200bn of Chinese imports; for example, Chemours’ stock price declined by 8 percent; DOW, 4.4 percent, LyondellBasell, 2.3 percent, and Westlake Chemical, 2.2 percent.

It is reported that 40% of the consumer goods exported from China to the United States have not been affected by the tariffs. The United States has started to raise the tariffs on 200 billion dollars of Chinese goods to 25%. American consumers will bear the cost of higher prices for clothing, shoes, toys, electronics and so on. But which chemical commodities will be impacted by tariffs?

Huge Impacts On The Chemical Industry Caused By Trade War

According to the trade data in 2018, commodities in China such as caustic soda, crylic acid, butadiene styrene rubber, titanium dioxide and acetic acid were affected the most, while those in the United States were ethane, polypropylene, titanium dioxide, butanol, butadiene and propylene glycol. However, because the quantity of Chinese exports to the United States is relatively small, it has limited impact on the supply and demand of commodities.

The trade war between the United Stated and China will intensify with the increasing tariffs. At present, although commodities account for a small part of the list of exports worth 200 billion to the United States, the United States have imposed tariffs on almost all textile and clothing exports in another list worth of 325 billion. It should be noted that the United States is the largest exporter of polyester fiber to China. Since the start of the trade war in the second half of 2018, the volume of American imports and exports has fallen sharply.

The amount of polyester fiber export is not high compared with its production, but due to the industry’s vulnerability, impacts of the trade war cannot be ignored. After the imposition of tariffs, exports to the US market will become less competitive.

In 2018, the United States exported 81,277 tons of PX to China, accounting for 0.51% of China's total imports. The United Stated imports PX mainly from Asian countries such as Japan, Korea and India. Due to limited domestic supply in the United States and expensive freight, China’s PX industry is not likely to be impacted by America’s increasing tariffs. Recently, the PX market price has declined sharply. The supply of PX will increase due to the release of China’s new devices, but the market demand will remain low.

A few years ago, the United States, as a main source of China's styrene supply, accounted for around 10% of China's styrene import. But in June 2018, the ministry of commerce said that there was a dumping in styrene imported from Taiwan, Korea and the United States, so China needed to impose anti-dumping duties on those products. The tax rate to the United States was from 13.9 percent to 55.7 percent, causing a sharp reduction in styrene imported from the US. In 2018, the total amount of styrene exported by the United States to China was 133,200 tons, accounting for 4.6% of the total, with a total amount of $174.59 million. Therefore, the escalation of the trade war between the US and China has a limited impact on the overall supply and demand pattern of styrene.

In 2018, the total amount of phenol imported into China was 418,750 tons, among which that exported from the United States reached 74,323 tons, accounting for about 17.75%, ranking the second place behind South Korea. According to the data, American phenol has greatly satisfied China’s domestic demand. However on March 26, 2018, China’s Ministry of Commerce decided to initiate an anti-dumping investigation of phenol imported from the United States, European Union, Korea, Japan and Thailand. In the past few years, the anti-dumping duty rate of domestic phenol is 36% in the United States, which is not low. Therefore, in the short term, the trade war between China and the United States has a limited impact on phenol imports, and most industrial insiders are focusing on when the outcome of the anti-dumping investigation will be announced.

The import and export volume of aromatic hydrocarbon between China and the United States is very small, so the trade war will have little impact on aromatic hydrocarbon. However, as the trade war escalates, China’s economic growth may be slowed down, leading to the recent sharp drop in commodities prices and stock market, which has also caused some pressure on the toluene and xylene markets. Many textile products and furniture products have been imposed on more tariffs. If the terminal manufacturing industry of the above products is affected, it will also affect the upstream aromatic chemical products.

The tariff policy has caused deep concern in the chemical industry of China and the United States. As an important industry of national economy, high tariffs will increase the cost of chemical production and directly affect the development of the whole industry. In addition, machinery, communications, light industry, textile and other products having been imposed more tariffs will indirectly affect the chemical coating, synthetic materials and other raw materials market. Tariffs imposed in the trade war between China and the United States will have a continuous impact on the chemical industry.