2019 Echemi Animal Health Industry Analysis Forum, organized by Echemi and VNU Exhibitions Europe, was held at Hall S3, Qingdao Cosmopolitan Exposition. Currently, related enterprises are benefited a lot from the rapid growth of the animal health industry and great market demand home and abroad. Following the market trend, Echemi focuses on the animal health industry to explore potential value. It is the fifth industrial forum organized by Echemi. During the forum, David Zhang, the founder of Echemi, and experts from China, Bangladesh, Vietnam, Ukraine and Argentina were invited to share the development trend of the animal health industry with more than 20 global buyers and over 70 Chinese suppliers. By doing so, Echemi and the global partners will know more about the market demand and seek a win-win scenario.

At 9:30 a.m., David Zhang firstly made an opening speech, showing the warmest welcome to all the distinguished guests. And then, he made an in-depth analysis of the animal health market.

“Through years of development, the global animal health market has entered a period of stability. In addition to the negative growth in 2009 due to the global financial crisis, the animal health market has maintained a steady growth. The market size increased from $13.7 billion in 2004 to $31.9 billion in 2018, with a compound annual growth rate of 5.7%.

The market size of China’s animal health industry still lags far behind world leading countries. However, with the gradual attention paid by the country to animal epidemic prevention and control and food safety, the domestic animal health industry has developed rapidly and maintained a relatively upward trend. China’s animal health market reached 4 billion euros (or 1 billion RMB) in 2017, and is expected to reach 9 billion euros (or 70 billion RMB) in the next seven years.” David Zhang said on the opening ceremony.

Professor Zou Ming from Qingdao Agricultural University delivered a speech entitled Market of Animal Health Industry & Research of New Veterinary Drug. In his speech, Professor Zou introduced current research situation of domestic and foreign animal health market, and research status of new veterinary drugs in China and beyond. He pointed out, “In the past 10 years, the veterinary drug industry has gradually formed an industrial system with complete categories, diverse varieties, advanced technology, complete industrial chain. API and some pharmaceutical products have international competitiveness.” Mr. Nguyen Viet Anh analyzed the animal market in Vietnam. From the perspective of the feed market in Vietnam, Mr. Nguyen Viet Anh introduced the character of and challenges facing with the husbandry market in Vietnam, pointing out that the industry was shifting into intensification. In 2014, the government promulgated the livestock restructuring plan, which aimed to restructure livestock production, envisage changes in the livestock population’s spatial distribution, in farming systems, and in value chains, along with institutional strengthening. Currently, there are 66 companies meeting GMP standard, producing and distributing with 6,768 medicines on the list of veterinary drugs permitted for circulation and more than 3,000 medicines of 40 importing countries. Dr. Fedir Marchenkov delivered a speech entitled Ukraine Feed Market Analysis. In his speech, Dr. Fedir Marchenkov introduced the feed market in Ukraine, main problems for livestock, and products trend. In terms of beef export in Ukraine, he pointed out that “Ukraine has been successful in developing export markets for their cattle in Central Asia, Caspian Sea countries, and North Africa. There will be no significant export destination changes are expected in 2019.” However, the Africa swine fever, infectious diseases and contamination in feed are tough issues that the global husbandry industry needs to deal with.

Finally, Ms. Eugenia Campanelli took the pet food market in Argentina as an example to introduce the feed industry in Latin America. She pointed out that in 2018, 720 million tons of animal feed was produced around the world, and Latin America and the Caribbean were responsible for 120 million tons, representing 17% of global production. Latin America and the Caribbean are important producers, consumers and exporters of grains and cereals, pork, poultry, cattle, and aquatic products. The region is the leader of the animal industry. At 1:00 p.m., Echemi guided tour began. Buyers were divided into two groups to visit Hall S2 for feed products and Hall S3 for animal health products respectively  according to their demands, and exchanged product information with many exhibitors on site. Through this activity, overseas buyers can get more information about Chinese suppliers, and in return, suppliers can also use this opportunity to display their production and sales capabilities. 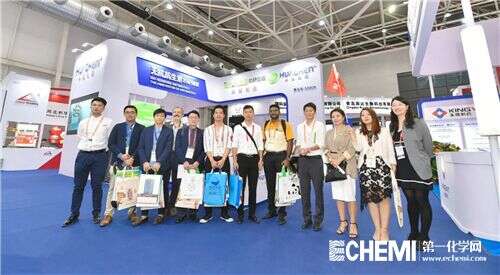 2019 Echemi Animal Health Industry Analysis Forum gets a wonderful completion. As a leading part of chemical business in China and a professional B2B platform, Echemi aims to provide better products and services to global chemical companies, and focuses on products price, market trend, and environment-friendly products. In the future, Echemi will stand ready to work with customers all over the world and Chinese suppliers to strengthen cooperation and create potential value. Echemi will bring new concepts and inject new blood to the industry, and its innovation and energy will trigger fast development and prosperity of the industry.