Europe BD could tighten in September as market re-balances

Following Butachimie’s announcement that it will delay its planned turnaround on adiponitrile (ADN) at Chalampe, France until late September, some BD players are growing more concerned over its impact on market fundamentals late in the third quarter.

“It’s a month of volumes, volumes which was not anticipated to be required… That’s huge. I would be surprised if it doesn’t create tightness for at least the month of September,” said a producer.

In early August, BD dynamics were balanced although remained long, with ample supply and bearish demand.

However, there are signs of tightness emerging  as the market balances.

Last week, a spot deal was confirmed at €790/tonne CIF (cost, insurance, freght) ARA (Amsterdam-Rotterdam-Antwerp), with one European consumer suffering from supply limitations and in need of prompt delivery.

Overall, the market is balanced with most players well supplied for the month.

“I would not say there’s a tightness in the European market. [I would say it is] Long to let’s say balanced, somewhere in between,” said a trader.

A period of cracker turnarounds will take place in the autumn, beginning with BASF in Ludwigshafen, Germany.

A number of planned and unplanned cracker outages are currently underway, though any expected supply constraints have so far been met by downstream production issues.

Two consumers have had issues at their sites in Bassens, Le Wantzenau, and Port Jerome, both in France.

“Volumes have to be returned to suppliers. This kind of balances out this delay in the turnaround," the trader added.

While conditions remain stable for mid-August, Butachimie’s upcoming turnaround could tip the scale between supply and demand in September.

A company source said: “The market in September should be tighter because of us, tighter than what people expect. But refilling our pipelines was not too much of a problem.”

Discussions for the European BD September contract price will begin next week.

The August contract price settled at a reduction of €20/tonne from the previous month. 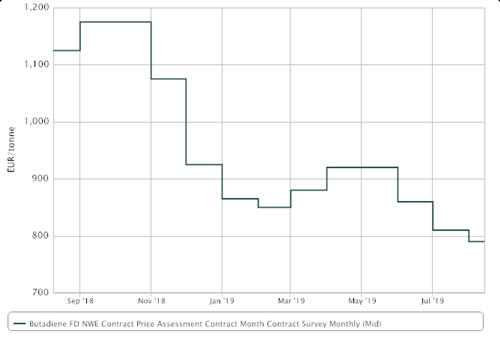 BD is a key feedstock for synthetic rubbers, largely styrene butadiene rubber (SBR), which is used in tyre manufacturing. BD is extracted from crude C4s.