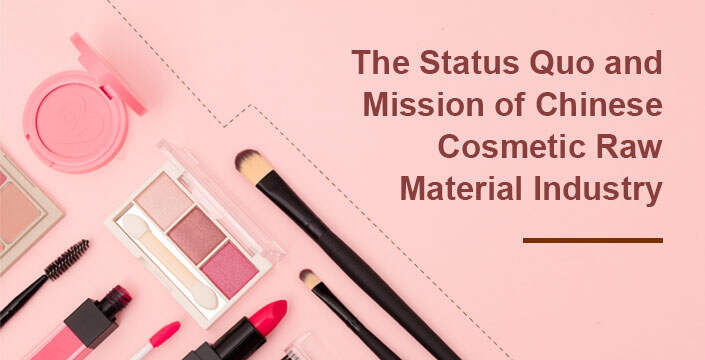 After the prologue in March, the negotiation and detente in May and the re-fermentation at the end of May, China and the United States finally failed to avoid facing each other on trade issues. On June 15, 2018, the White House announced a 25 percent tariff on $50 billion in imports from China containing important industrial technology. On June 18, Trump also threatened to impose a 10 percent tariff on $200 billion of Chinese goods. On the other hand, the Ministry of Finance of the People’s Republic of China issued a notice on June 15, decided to impose 25% tariffs on 659 imported products of about 50 billion US dollars, which involved triethanolamine, organic silicon and other necessary raw materials for the cosmetics industry. As China and the United States turn to a trade war, it is bound to have a huge impact on China's cosmetics industry.

China’s cosmetics industry is one of the first industries open to foreign countries since the founding of the People’s Republic of China in 1949, which also leads the industry to the impact of transnational capital and multinational enterprises earlier. After decades of development, the cosmetics industry in recent years have seen an unprecedented rapid growth.

Under the fast growth of the whole industry, especially in private enterprises, the industry knowledge, perspective and technology are rising rapidly, the pace of technological innovation of enterprises is accelerated, the management quality is improved, and the brand building is increasingly strengthened.The gradual integration of online and offline business has drawn increasing attention from the capital market and other related industries. Both finished product companies and raw material companies have attracted a large number of investors, accelerating the process of cross-industry integration.

1.2 Regulations and supervision are improving gradually

The development of Internet has driven the explosion of e-commerce, WeChat business and other new sales channels. The eye-catching personalized expression and low-cost marketing methods have broken the original sales pattern and improved the significance of products’  features. Large enterprises of cosmetics products begin to turn their attention to products themselves while continuing to pull traditional channel sales with policies and advertisements.

Five years ago, K-beauty was created in Korea, which was an innovation. After the explosive innovation, the original input needed time to adapt and recover the capital, and the domestic market of South Korea was becoming saturated. At the bottleneck period, brain drain was widespread, and many employees were hired into Chinese cosmetics enterprises with high salaries to integrate Korean innovative ideas into local market. At present, cosmeceuticals are all the rage in the Korean market, sunscreen bars are out of stock, and packaging and product integration innovation are particularly developed in the mask industry. However, because of legal differences, many innovations are hard to replicate at home. Therefore, domestic cosmetics industry are not satisfied with Korean-style development only, showing the attitude of learning from Japanese cosmetic industry.

1.5 Lack of creativity in structure design and the modelling of the packaging industry

Packaging design is one of the indispensable development links of cosmetics. High-quality, innovative and customer-oriented packaging can attract more consumers and win more market shares for brands and products. .At present, there are insufficient creativity and imagination in  structure design and the modelling of domestic packaging industry. Packaging homogenization is obvious, and the disregard for high-quality and high-price packaging restricts the development of matching packaging industry of cosmetics.

Globally, the cosmetic ingredients enterprises can be divided into three camps. The first one is Japanese raw material manufacturers represented by NissinOillio, NikkolChemicals, Shin-Etsu, Ajinomoto, Sumitomo, and TAYCA, who have the purest products, the best quality and the highest price. The second one is European and American raw materials producers who are traditional chemical giants, such as BASF, DSM, DOW, and Symrise, for which the cosmetic raw materials are only part of their business. China, Korea and India are among the third camp, enterprises of which includes China Bluestar, Hunan Resun-Auway, Bloomage Biotechnology, Tinci, Zhejiang NHU, SK, KCC, Kelon, and Galaxy.

Taking the Asia-Pacific region as an example, the industrial strength of cosmetics raw materials is compared as follows (excluding the most basic starting materials), as shown in table 1.

As can be seen from table 1, among all kinds of cosmetics raw materials, China gains an advantage only in low-end synthetic skin care grease, moisturizer, monomer active substance (extracted) and sunscreen. However, there is an embarrassing situation that relevant technologies are not well applied in the domestic cosmetics field.

Who are the world’s top 10 cosmetic ingredients giants?