Raw materials:This month, the auction of state-owned reserves continued to maintain the situation of high volume and price. The domestic corn market price went up with the policy, and the cost of processing raw materials continued to rise. At the same time, the downstream consumption of starch rebounded after the weather turned hot. The frequent rainfall and weather in July made the export of starch more difficult than before. Under the support of many favorable conditions, the domestic corn starch market was in a state of high difficulty Prices continued to rise.

It is expected that under the support of cost and demand, the domestic corn starch market price will continue to be stronger in the short term. 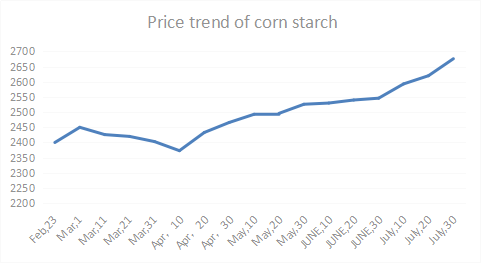 Fufeng: The price of Fufeng has been significantly reduced this month. After a round of personnel adjustment, the sales channel of Fufeng tends to be stable. At present, the new policy is that the company does not allow the addition of new domestic traders. Under the influence of the new policy, merchants relying on Fufeng are greatly affected. In addition, due to the strong development of Meihua in xanthan gum market in recent years, traders will gradually put more purchase quantity on Meihua, leading to fufeng's decline in the future.

Meihua: The Meihua is basically finished due to the influence of food-grade bacteria contamination, and the new delivery date is close to unlimited. At present, the food-grade mainly produces European and American standards. For the customers who need national standard before and have orders in Meihua that haven't been delivered for a long time, Meihua will arrange to send European and American standard goods to be downgraded to national standard goods to execute the order. Oil grades are still relatively large, but they turned off-season starting in June and are traditionally expected to last beyond September. At present, the new policy announced by Meihua is to limit the quantity but not the price, and to sign a framework agreement to limit the monthly quantity required, and the price will follow the market, but the customer who signs the framework agreement will get a price 500 yuan lower than the market price.

Deoson: In recent months, the demand for Xanthan gum is not strong, and the market price has dropped, leading to a decrease in the order quantity of Deoson and an increase in the inventory of the factory. This month, Deoson's new policy is to reduce the price of food-grade Xanthan gum. The price of Xanthan gum has been close to the same level with Fufeng, and the price policy is expected to remain until the end of August. 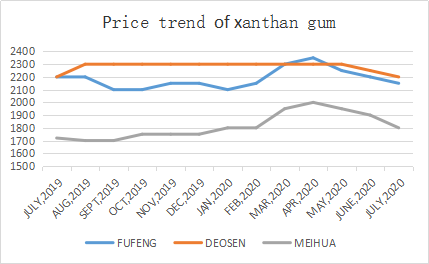 This period raw material price increase is more obvious, xanthan gum cost slightly increased. However, the epidemic situation abroad is still serious, resulting in weak overall demand for xanthan gum and long-term weakness of demand, resulting in the price of xanthan gum is difficult to be firm, domestic factories began to reduce prices on a large scale. The price reduction of the three domestic factories is basically the same, indicating that the xanthan gum market has entered a declining trend, the continued hot situation in the first half of the year is expected to cease to exist this year.

Market forecast for the next period

On the raw material, the price of corn starch stable with rising, xanthan gum cost has risen. However, the impact of the foreign epidemic has not been eliminated, xanthan gum market demand continues to be weak, export hindered. In the case of insufficient orders received by factories in May and July, all factories overstocked. Factories eager to clear inventory, so they will start to cut prices sharply. But the current situation of xanthan gum market in August is still not optimistic, it is expected that in order to pursue orders in August ,factories will cut prices to compete, so a new round of price war is about to start.