 Home > Analysis of Operating Rate in Dyes Industry in 2017

Analysis of Operating Rate in Dyes Industry in 2017

Introduction: In Q3, 2017, the dyes industry saw two events: continuous increasing offers and the low operating rate during the environmental protection supervision. Today, the detailed analysis of the operation in dyes industry in the first three quarters will be shown here. 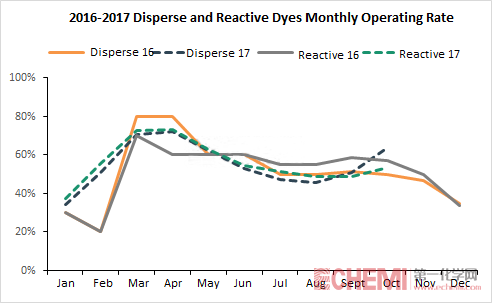 There are a large number of dyes producers. Variety and production & sales in each producer are very different. Today, we will analyze the operation status of disperse dyes and reactive dyes.

In mid 2017, the dyes market entered the off season. Most producers cut down operating rates to cut down the inventory pressure.

In Q3, 2017, the demand welcomed the peak season again. The operating rate should recovered rapidly. However, the environmental protection supervision in August and September influenced the production. The overall operating rate was low.

How Long Will the Increasing Maleic Anhydride Market Go? LANXESS : Expands Capacity for Macrolex Dyes at Its Leverkusen Site