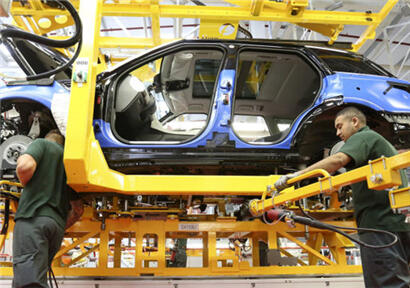 The automobile industry constitutes 7.1% of the country’s GDP, and 49% of the manufacturing GDP.

Inclusive of its value chain, the industry supports over 30m jobs, as per data from the Society of Indian Automobile Manufacturers (SIAM).

Two wheeler sales have also seen an average 16% decline during the period while commercial vehicle manufacturers saw a year on year sales slump of between 15-34% in July.

“We need short-term measures to catalyze consumption,” said Anand Mahindra chairman of auto major Mahindra Group in his speech to shareholders at the company’s annual general meeting on Wednesday.

This slowdown in the auto industry is also being reflected in the ancillary industries, which includes the chemicals and plastics segments.

Leading Indian paints manufacturers Asian Paints and Berger Paints have noted a downward pressure on their automotive paints segment due to the slowdown.

“Post October 2018, the auto and two-wheeler markets have slowed down significantly, thereby putting increased pressure on all companies in the automotive coatings segment,” said a source at Asian Paints.

Chemicals, technical textiles and engineering plastics manufacturer SRF Ltd has seen a 11% decline in sales in its technical textiles segment in the first quarter of 2019-20 and expects the subdued demand from the automotive industry to continue in the near term, a company source said.

“During the quarter under review, we witnessed heightened price volatility and compression of spreads in phenol on account of worldwide slowdown in the auto industry which impacted the demand for phenol-based derivatives,” he added.

The auto components industry is also currently in a crisis like situation due to the cut in vehicle production, said Ram Venkatramani, president of the Automotive Component Manufacturers Association of India (ACMA), the apex body representing the interest of the Indian auto component industry.

“If the trend continues, an estimated 10 lakh (1m) people could be laid-off,” he added.

The automotive component industry contributes 2.3% to India’s GDP, 25% to its manufacturing GDP and provides employment to 5m people as per ACMA records.

The drop in sales is forcing many companies in the auto sector to cut jobs and slow down production through forced shutdowns.

Automakers, parts manufacturers and dealers may have laid off about 350,000 workers since April, media reports said.

“This economic slowdown has weakened sentiment among buyers. Rural demand has also slowed down due to the erratic and delayed onset of monsoon,” said a source from automobile maker Ashok Leyland.

The slowdown could continue until the second half of financial year 2020-21 as the move to make vehicles BS (Bharat Stage)-VI compliant could keep automobile sales under pressure, he added.

The Indian government plans to enforce its stringent BS VI fuel emission norms for vehicles by April 2020 as part of its measures to reduce air pollution.

The transition to BS VI could make vehicles costlier by about 15-18% for buyers, the source at Ashok Leyland said.

In a bid to arrest the fall, auto industry leaders met Indian finance minister Nirmala Sitharaman on 6 August to ask for a stimulus package that would include a lower tax slab on vehicles.

“We are hopeful that the government will offer the auto industry a stimulus package soon,” Wadhera of SIAM said.